The NATURAL European project, just completed, has left interesting results in its two main areas of activity, nanocoatings improved formulation and development of a device capable of measuring in-situ the status of a coating. Specifically, coatings have been developed based on different nanomaterials capable of improving the performance of commercial coatings, and on the other hand, has assembled a portable prototype combining measures contact angle, fluorescence and roughness for enhanced control of coatings localized to weather such as wind turbine blades.

Currently, turbines windmills suffer losses of 5-10% in electricity production, plus the dirt accumulated on the blades can reduce power production by 50%. Likewise, erosion surfaces suffering aircraft has come to increased fuel consumption and CO2 emissions by 5%. In this context, the project NATURAL appears aimed relate the durability and performance of the coating to the surface energy, flow behavior and surface roughness. This has been developed new coatings and surface treatments with nanostructured materials, for application especially in windmills turbines, capable of reducing the rate of erosion and soil levels and increase durability, getting one hand , increase the efficiency of electricity production and, secondly, to reduce CO2 emissions into the atmosphere.

More in detail, the Lurederra Technology Centre has completed various technical activities among which are the synthesis of specific nanoparticles with functionality increased abrasion resistance and deposition tests of different nanocoatings. 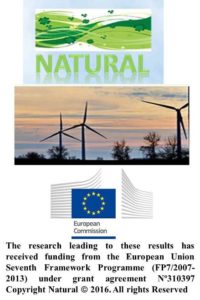