THE “MAREWIND” PROJECT, DRIVEN BY PARTNERS, PROGRESSES WITH GREAT CONFIDENCE

The European project MAREWIND, which addresses the main aspects related with the durability and the maintenance of the offshore structures, has already achieved the first phase of its path and it is progressing according to expected, as revealed in the online meeting which took place in 22nd of June, at the end of 18 Months of development and in which participated all the partners of the consortium. Likewise, at the following day, took place the first Review Meeting of the project, in which participated both the consortium and the Project Officer and the Project Monitor.

In both meetings, interesting results were exposed in all research areas involved in the project which covers the entire value chain of wind energy. In addition, it was possible to verify how the objectives set have been fulfilled in each of the tasks and work packages, according to planned.

Focusing more in detail on Lurederra progress, the advances in the anticorrosion coating were shared, including the development of a 3-layer advanced system, with low thickness, mild curing temperature and that resists a large number of hours inside a saline mist chamber, a ground-breaking result in comparison with the current market products. On the other hand, for the antifouling coating with high repellence properties, the results exposed were very positive, including a one-layer formulation requiring just room temperature for curing. This formulation was tested and validated in a wide variety of substrates.

In this 18th month of the project, the step forward is directed towards pieces of real offshore structures, leaving back tests carried out so far in small laboratory test samples. It is now expected to continue with the progress at higher levels, and the corresponding advances in the developments will be shared in the following meeting, which will likely be held in person. 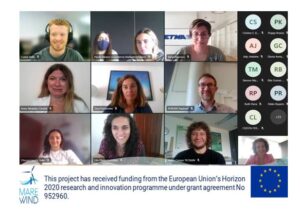