ZEOCAT-3D: DESIGN OF THE REACTION SYSTEM FOR THE NEW NANO-CATALYST

The reaction system that has been developed in the European project ZEOCAT-3D, which aims to develop a bifunctional zeolite based on a nano-catalyst for the methane conversion into hydrocarbons, is installed and already working in the facilities of the Research Center of the University of Poitiers (CNRS-Poitiers). Different catalyst compositions and conformations that have been developed by several partners are being tested there.

This was one of the advances that was presented at the corresponding Month36 meeting of the ZEOCAT-3D project, held at the end of April, and in which the work plan for the last stage of the project was also settled on. On the following months, these tests will continue, as well as the optimization of the system, incorporating other additional stages, such as the purification of inlet flows.

The corresponding activities of Lurederra Technological Center have focused on the impregnation of zeolitic pieces 3D-printed, with the complex nano-oxides previously synthesized through the FSP equipment. In that sense, a specific methodology for the production of these nanomaterials was designed and optimized as the different characterization tests were carried out. Throughout this task, the Center has been in continuous contact with the company VITO, in charge of printing and supplying monoliths, as well as with CNRS-Poitiers, in charge of the catalytic characterization of the already impregnated samples. Regarding the effectiveness of nano-catalysts, there are promising results. In addition, possible advantages are raised when using nanoparticles instead of other alternatives for the incorporation of active materials.

In parallel, the Lurederra’s team keep updated the progress of each stage of the catalytic system in order to carry out its corresponding environmental and social study. This study will be active until the end of the project, updating the data as new parameters of the system are defined, as well as new catalyst characteristics. 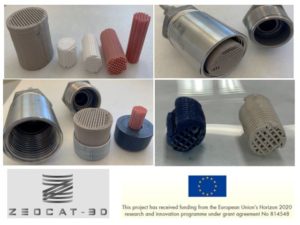 “MAREWIND” SUCCESSFULLY REACHES THE MIDDLE OF ITS COURSE IN THE RESEARCH OF OFFSHORE STRUCTURES
2 December, 2022