“PARTIAL PGMs”, IN THE FINAL STAGE OF THE PROJECT, DEVELOPING PROTOTYPES

After 3 years of the European project PARTIAL-PGMs, in which new catalysts have been developed, the research is its final stage and the development is focused in testing at prototype level.

The meeting corresponding to the 3rd year of the project took place in March in Spain. Concretely, in the facilities of Lurederra Technology Centre, in Los Arcos (Navarre). During the meeting the consortium focused on defining the actions for the success of the project. In the specific case of Lurederra, it has a key role regarding the production of the new nanomaterials at large scale using its exclusive pyrolytic technology.

This project has received funding from the European Union’s Horizon 2020 research and innovation programme under grant agreement No 686086. 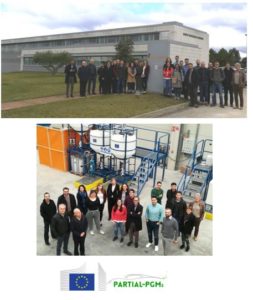 THE ZEOCAT-3D PROJECT HOLDS ITS FIRST REVIEW MEETING AFTER 18 MONTHS OF PROGRESS
14 October, 2020

THE DEVELOPMENT OF MORE EFFICIENT SOLAR PANELS CONTINUES WITHIN THE “SUPER-PV” PROJECT
16 June, 2020

THE PROGRESS CONTINUES FOR ION4RAW PROJECT
20 May, 2020

“ZEOCAT3D” PROGRESSES IN THE ACHIEVEMENT OF A NOVEL NANOCATALYST
24 March, 2020