ION4RAW CONTINUES ITS DEVELOPMENT DESPITE THE PANDEMIC. THE MEETING OF MONTH 18 AND THE FIRST REVIEW MEETING TAKE PLACE.

Last December, the meeting corresponding to Month 18 of the ION4RAW project took place, as well as the first Review Meeting in which each of the partners explained to the European Commission the progress that they had developed during this first part of the project. Due to the current situation, this meeting took place by teleconference.

Among all the project work packages that have been progressing in this first stage, the analysis of the materials collected in the different partner mines of the project stands out, including two deposits in Peru, in addition to the mines that are being studied in Scotland and Spain. Also noteworthy are the first DES leaching tests to extract the highest possible percentage of target metals. Along with this, modeling tests are being carried out, as well as the stability of the DES over time, since the recovery and reuse of these components is one of the keys of the project.

On the mentioned meeting, LUREDERRA Technological Center explained, on the one hand, the advances in the filtration and separation stage of DES with metals from the leached mine concentrates, achieving DES recoveries of around 90%; while, on the other hand, the different strategies to be followed for the extraction of metals (Au, Ag and Te, mainly) from the filtered DES mixtures were described. 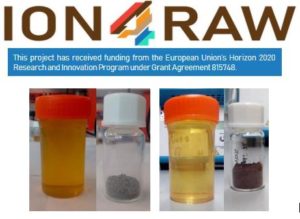 MAREWIND, or how to improve maintenance of offshore structures
20 January, 2021

WASTE2FRESH PROJECT STARTS WITH THE OBJECTIVE OF REUSE THE WATER OF TEXTILE FACTORIES
11 January, 2021

THE ZEOCAT-3D PROJECT HOLDS ITS FIRST REVIEW MEETING AFTER 18 MONTHS OF PROGRESS
14 October, 2020

THE DEVELOPMENT OF MORE EFFICIENT SOLAR PANELS CONTINUES WITHIN THE “SUPER-PV” PROJECT
16 June, 2020